While secretly observing services for a deceased family friend, recently orphaned 13 year-old Mike witnesses an impossible feat performed by the funeral director known only as The Tall Man.  Later, while following his older brother to a tryst in a cemetery he tries to warn his brother of a dwarf-like creature he sees scurrying in the shadows.  The Tall Man begins appearing in Mike’s nightmares, and he journeys alone to the isolated funeral home to gather evidence to support his belief that the mortician is responsible for the strange happenings in his New England town…

Phantasm (1979) is a cult horror which sticks two fingers up at the classic period-set horrors of the past few decades and rushes headlong towards the gory special-effects filled eighties with a youthful exuberance. Another firm favourite with the horror crowd Phantasm rounds off the Frighten Brighton Classic Horror Film Festival all-day movie marathon in style!

So join our sponsors  Hemlock Books and Shock Horror Magazine and scream queen Emily Booth tomorrow, Saturday 11th August for FRIGHTEN BRIGHTON 2012!!!  Don’t delay, book today….all-day passes are now almost SOLD OUT!!!  You will also get the chance to buy personally signed 8×10 glossy photographs of the lovely Emily, so be there…and be scared!

DOOMED TO WALK THE EARTH AS SLAVES TO THE LORD OF THE LIVING DEAD!

Young workers are dying because of a mysterious epidemic in a little village in Cornwall. Doctor Thompson is helpless and asks professor James Forbes for help and they soon become trapped in a living nightmare as the dead rise from their graves and terrorise the village!

Plague of the Zombies (1966) is a highly influential classic horror movie from Britain’s legendary Hammer Films. A firm favorite with fright film fans of all ages the imagery and special make-up effects used paved the way for George Romero’s Night of the Living Dead (1968) and all subsequent zombie films. You have a chance to watch Plague of the Zombies on the big screen this Saturday as part of the Frighten Brighton Classic Horror Film Festival! 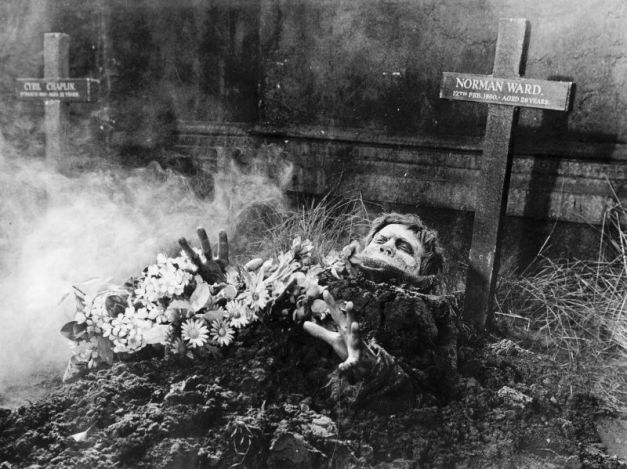 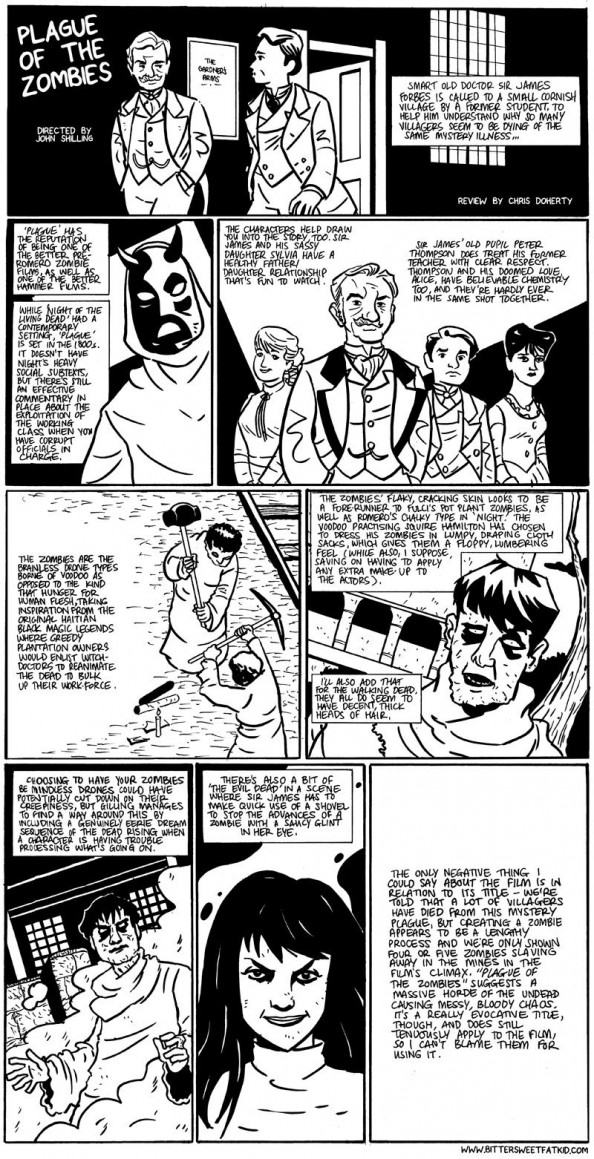 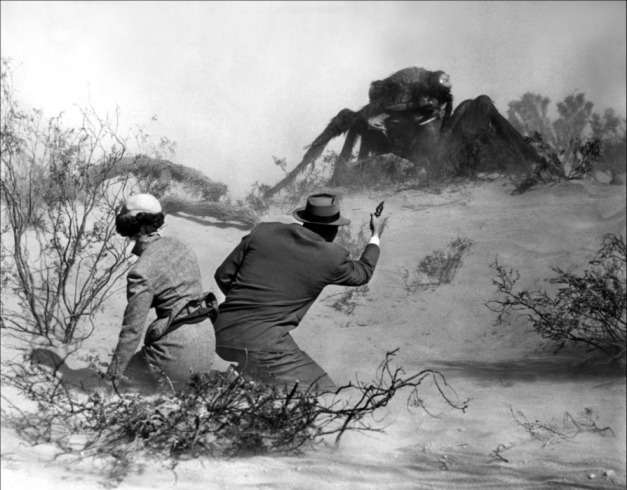 In the New Mexico desert, Police Sgt. Ben Peterson and his partner find a child wandering in the desert who is absolutely petrified by some mysterious unseen horror… it soon comes to light that gigantic radioactive ants are on the loose and attacking mankind!

Them! (1954) is one of the earliest “atomic monster” movies and can truly be classed as one of the most loved and respected films in both the science-fiction and classic horror genres. A real fan favourite Them! was nominated for an Oscar for its ground-breaking special effects and is being shown as part of the Frighten Brighton Classic Horror Film Festival this Saturday!

To Kiss Her Meant Death By Her Own Fangs And Claws!

Irena Dubrovna, a beautiful and mysterious Serbian-born fashion artist living in New York City, falls in love with and marries average-Joe American Oliver Reed. Their marriage suffers though, as Irena believes that she suffers from an ancient curse – whenever emotionally aroused, she will turn into a panther and kill!

Cat People (1942) is an incredibly atmospheric film produced by Val Lewton and directed by Jacques Tourneur which has become one of the most iconic classic horror movies of all time. A firm favourite with celebrity Horror Host Emily Booth who is presenting Cat People as part of Frighten Brighton this Saturday, when I spoke to Emily recently she explained ” I have a big place in my heart for Cat People…I love a return to animalistic states – a profound theme in horror films and the fact that this film was way ahead of its time, subtly telling a story of burgeoning female sexuality during a very repressed time – there are just so many levels to that film and it’s so haunting and moody! “ 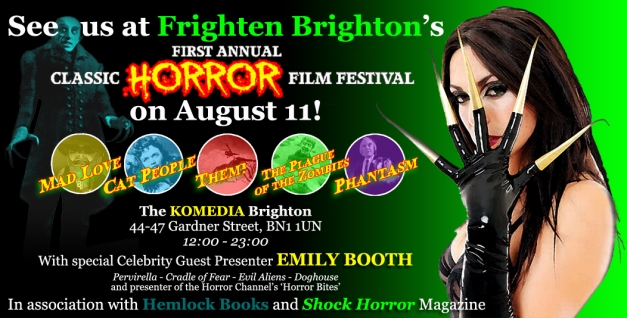 Suitable Only For Adults!!!

An insane surgeon’s obsession with an actress leads him to replace her wounded pianist’s hands with the hands of a knife murderer which still have the urge to throw knives…..Mad Love – a terrifying classic horror film starring Peter Lorre kicks off the Frighten Brighton Classic Horror Film Festival this Saturday!

Not well received critically on its initial release Mad Love (1935) has since been reappraised and is now considered to be one of the all-time classic horror greats! Star Peter Lorre went on to star in fright flick favourites The Beast With Five Fingers (1946), Tales of Terror (1962) and The Raven (1963). 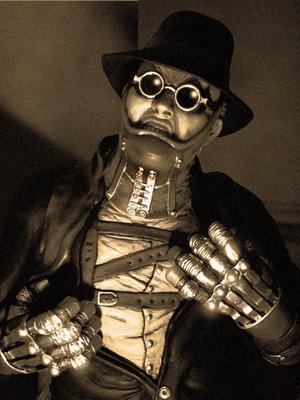 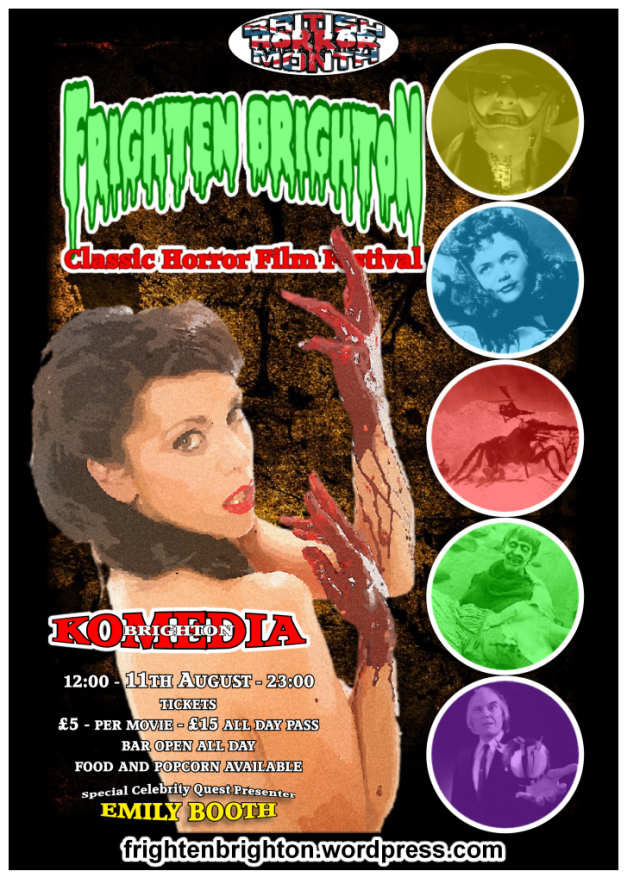 Only one week to go until the Frighten Brighton classic horror film festival hits town and tickets are selling like hot cakes!

You don’t want to miss out on the thrills of Mad Love, the horror of the Cat People, the giant monsters of Them!, the Plague of the Zombies and the absolute terror of Phantasm – all on one exciting program for only £15!

The Komedia Brighton is hosting a whole day of horror with Cyberschizoid and Scare Sarah of the Classic Horror Campaign and special guest star Emily Booth – star of numerous fright flicks as well as the premiere Horror Host on TV’s Horror Channel!

Horror movie merchandise specialists Hemlock Books and top UK publication Shock Horror Magazine are also along for the ride so don’t be disappointed! Creep along to the Komedia Crypt (or online box office as it’s otherwise known!) and grab your all-day passes now!

BE THERE….AND BE SCARED! 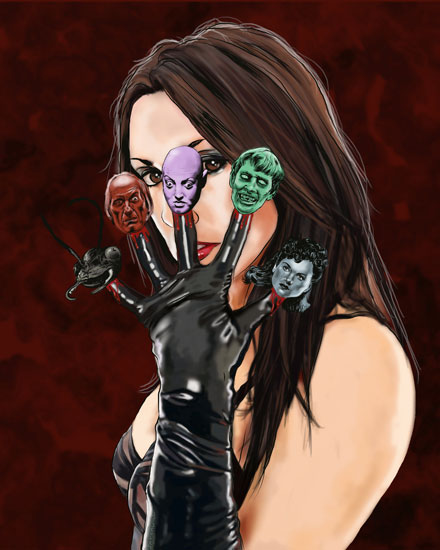 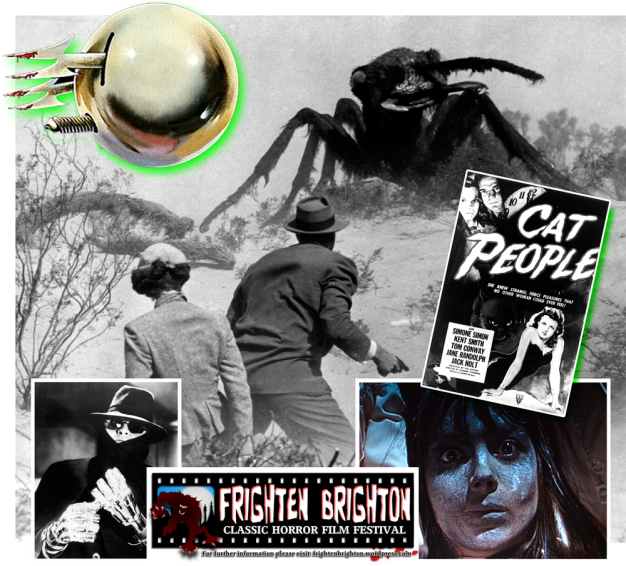